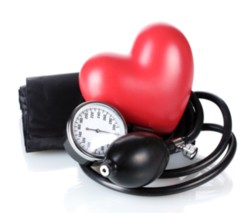 Did you know that one out of every three Americans have Hypertension (high blood pressure) and almost as much as 20% don’t know it; this is because most people don’t exhibit symptoms. The trouble is, when the symptoms do rear their head, it is usually extreme enough to be a medical emergency. So when does hypertension happen? It’s when the pressure in your arteries rises and the heart has to pump unusually hard in order to get the blood throughout the body.

•Blood in the urine

•Pounding in your chest, neck, or ears

Having hypertension directly impacts your quality of life and puts you in danger. Hypertension can lead to:

• Coronary artery disease — HBP damages arteries that can become blocked and prevent blood from flowing to tissues in the heart muscle. When blood cannot flow freely to your heart, you can experience chest pain, a heart attack or arrhythmias.

• Stroke — HBP can cause blood vessels in the brain to burst or clog more easily.

• Heart failure — The increased workload from high HBP can cause the heart to enlarge and fail to supply blood to the body.

• Kidney disease — HBP can damage the arteries around the kidneys and interfere with their ability to effectively filter blood.

• Vision loss — HBP strain or damage to blood vessels in the eyes.

• Peripheral artery disease — Atherosclerosis caused by HBP can cause a narrowing of arteries in the legs, arms, stomach and head, causing pain or fatigue.

Now, get it out of your head that hypertension is inevitable because it runs in your family or it’s just in your genes. High blood pressure is more closely related to your lifestyle habits than your genes. Even if you do have the gene, you need to give that gene ammo to express itself. If you eat properly and exercise regularly, that gene won’t be allowed to be turned on and will stay dormant in your system.

There have been dozens of studies going as far back as the 1920’s showing that people who eat a plant-based diet have lover blood pressure than omnivores. In the Adventist 2 Study, which looked at 89,000 Californians, it found that those who only ate meat on a weekly basis had 23% lower rates of high blood pressure. Those who cut out all meat except fish had 38% lower rates. Those eating no meat at all, vegetarians, had less than half the rate. And those who went 100% plant based/vegan, had eliminated roughly 75% of their risk!

One of the most amazing diet change studies was conducted by John McDougall. The study tracked 500 people with a myriad of health problems, who attended a 12-day residential lifestyle modification program. The participants consumed a low fat, whole foods, plant-based diet including; fruit, vegetables, whole grains, and legumes and ate ZERO animal products and consumed no alcohol. There were no restrictions on portion size; they could eat as much as they desired!  Also, the participants were required to exercise and practice stress management techniques. Within 11 days, the participants experienced large drops in blood pressure. In most of the people, all blood pressure medications were stopped shortly after beginning the program. You don’t have to be taking those pills that are damaging your body!

Now, the American Heart Association does NOT recommend a 100% plant based diet. They recommend what is called DASH (Dietary Approach to Stop Hypertension), which is essentially a low-meat diet. But perhaps they just didn’t have all the evidence from these studies when they came up with their recommendation and just never got around to changing it right? WRONG. The AHA didn’t think that the public could handle giving up all animal products, so they tweaked their recommendation to make it more palatable. And to some extent this makes sense; you don’t want to shock people too much and not get them to make any dietary changes. But being that over 1000 people a day die from HBP, shouldn’t the public be getting the whole truth and deciding for themselves what they can handle?

Sodium is another thing that should be limited. Consume no more than 2300mg a day of sodium for the average person. and cut that in half if you are sensitive to salt. Ditch the processed foods since they are typically high in salt, use different herbs and spices instead, and cook more at home! Restaurants load their meals up with salt (sometimes as much as 4 times the RDA!).

Exercise: Get AT LEAST 30 mins a day every day. Go for a walk after dinner, do some push ups during the commercial break. Every little bit helps.