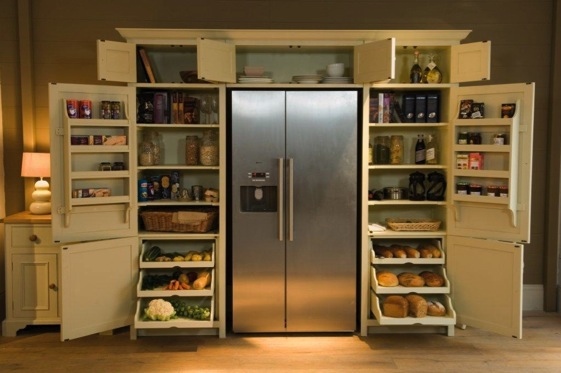 People always ask me, “Hey Ryan, what should I always keep stocked in my kitchen?”. So, check out the list I comprised and do yourself a favor and pick them up next time you’re out grocery shopping (if you don’t like reading, you can listen to me talk about these items here):

1. Tofu: Derived from soy, it’s an excellent source of amino acids, protein (8.2g/100g), iron, calcium, and is very low carb. The whole myth that it will screw with your hormones, give men boobies, and all that other nonsense is exactly that… nonsense. Check out this news article and get some science dropped on you.

2.  A Variety of Raw Veggies & Dark Leafy Greens: This is sort of an all encompassing item but what the hell. Be sure to always be stocked up on a variety of RAW plants. These are your source of micronutrients, lean protein, and FIBER. Some of my favorites are cucumber, zucchini, onion, sprouts, avocado, radish, daikon, bell pepper, mushroom, watercress, and cabbage. Also, you need two have at least two types of dark leafy greens like spinach, kale, and arugula. *Pro Tip: chose them all up and put them in a massive salad every day for fast consumption and a massive rush of micronutrients.

3. Apple Cider Vinegar: Super good for gut health, ACV helps kill pathogens including bacteria. It can help disinfect, treat nail fungus, lice, warts, and ear infections, as well as give a boost to your immune system. It can also aid in better sleep by concocting the drink found here. Use it in marinades, salad dressings, or take a hit straight from the bottle but NOT on an empty stomach. ACV also helps lower blood sugar levels and fights type 2 diabetes, aids in weight loss by increasing the feelings of fullness, lowers cholesterol, and reduces risk of heart disease. Studies have also hinted that ACV can aid in cancer treatment by helping to kill cancer cells and shrink tumors.

4. Quinoa: I like to use quinoa instead of rice. It’s protein rich and is “complete”, meaning it contains all nine essential amino acids. Technically a seed, not a grain,  and contains almost twice as much fiber as most grains. Rich in iron rich which supports healthy blood cells, contains lysine which is essential for tissue growth and repair, rich in magnesium which can help alleviate migraines and control blood sugar; helps reduce type 2 diabetes. Quinoa is also high in B2 which improves energy metabolism within the brain and muscle cells, and is high in Manganese which is an antioxidant.

5. Nutritional Yeast Flakes: It’s a plant-based source of B12 which is crucial in the production of red blood cells and for producing and maintaining myelin, the protective insulation around your nerves. Most sources of Vitamin B-12 are animal based, so nutritional yeast is a major player in the nutritional wellbeing of vegans. It’s also high in protein – 2 tablespoons of it contain 9 grams of protein. That’s more than in 1 cup of whole milk (8g), a large egg (6g), or one oz. of beef (7g). It’s a wonderful source of energy for your workout mornings. It’s high in fiber – It also helps our systems regulate blood sugar giving us a more sustainable, even store of energy throughout our days and at higher levels. It’s a great source of folic acid – Especially important for women out there trying to get pregnant or who are currently pregnant,  folic acid is known to prevent spina bifida and other major birth defects. For those not planning to get pregnant, folic acid is still important for its role in cell maintenance and production. Sprinkle it on your salads, over roasted veggies, on vegan pizzas, or to season any of your plant-based creations. It’s got a bit of a cheesy flavor.

6. Olive Oil/Sesame Oil: They are unsaturated fats, aka: “Good” fats. Good fats can improve blood cholesterol levels and lower your risk of heart disease. They can also benefit insulin levels and help control blood sugar (especially helpful if you have Type 2 Diabetes).

7. Himalayan Pink Salt: Once upon a time (a couple hundred million of years ago) crystallized sea salt beds, now deep within the Himalayans, were covered by lava. Aside from being kept it in a pristine environment that has been surrounded by snow and ice year round, the lava is thought to have protected the salt from modern-day pollution leading to the belief that Himalayan Pink salt is the purest salt to be found on earth. It is now hand-mined from the mountains and brought to your kitchen.  It packs more than 80 minerals and elements in it’s crystals which can give the following health benefits:

• Regulate water content both inside and outside of cells

It is even said to support libido, reduce the signs of aging, and detoxify the body from heavy metals.

8. Whiskey/Rye/Burbon: 0 sodium, carbs, sugar, or fat. There are so many different varieties of taste and you can drink it alone without all the added calories of a mixer, and without all the sugar and carbs of beer/wine. It’s also safe for diabetics, so drink up!

9. Garlic: High in a sulfur compound called Allicin, which is where most of the health benefits come from. Low in calories. A 1 ounce (28 grams) serving of garlic contains (3):

Its also been shown to boost the immune system. One large 12-week study found that a daily garlic supplement reduced the number of colds by 63% compared with placebo. The average length of cold symptoms was also reduced by 70%, from 5 days in placebo to just 1.5 days in the garlic group. Another study found that a high dose of garlic extract (2.56 grams per day) can reduce the number of days sick with cold or flu by 61%. Garlic can help reduce blood pressure, improve cholesterol levels which can lower the risk of heart disease, and contains antioxidants that may help prevent alzheimers and dementia. Garlic contains antioxidants that support the body’s protective mechanisms against oxidative damage. High doses of garlic supplements have been shown to increase antioxidant enzymes in humans, as well as significantly reduce oxidative stress in those with high blood pressure. The combined effects on reducing cholesterol and blood pressure, as well as the antioxidant properties, may help prevent common brain diseases like Alzheimer’s disease and dementia. Garlic also helps reduce fatigue and can reduce peak heart rate.

10. Turmeric: There are a gazillion and one reason that turmeric should be used everyday as part of your kitchen staple, but here are 25:

1.Turmeric is a natural antiseptic and antibacterial agent, useful in disinfecting cuts and burns.

3.Prevented breast cancer from spreading to the lungs in mice.

4.It may prevent melanoma and cause existing melanoma cells to commit suicide.

5.Reduces the risk of childhood leukemia.

6.Turmeric is a natural liver detoxifier.

7.Turmeric may prevent and slow the progression of Alzheimer’s disease by removing amyloyd plaque buildup in the brain.

8.It may prevent metastases from occurring in many different forms of cancer.

10.Has shown promise in slowing the progression of multiple sclerosis in mice.

11.Turmeric is a natural painkiller and cox-2 inhibitor.

12.May aid in fat metabolism and help in weight management.

13.Has long been used in Chinese medicine as a treatment for depression.

14.Because of its anti-inflammatory properties, turmeric is a natural treatment for arthritis and rheumatoid arthritis.

15.It boosts the effects of chemo drug paclitaxel and reduces its side effects.

16.Promising studies are underway on the effects of turmeric on pancreatic cancer.

17.Studies are ongoing in the positive effects of turmeric on multiple myeloma.

18.Turmeric has been shown to stop the growth of new blood vessels in tumors.

19.It speeds up wound healing and assists in remodeling of damaged skin.

20.Turmeric may help in the treatment of psoriasis and other inflammatory skin conditions.

21.Curcumin seems to delay liver damage that can eventually lead to cirrhosis, according to preliminary experimental research at the Medical University Graz in Austria.

22.Kansas State University research found that adding certain spices, including turmeric, can reduce the levels of heterocyclic amines — carcinogenic compounds that are formed when meats are barbecued, boiled or fried — by up to 40 percent.

23.Rodent studies at the University of Texas indicate that curcumin inhibits the growth of a skin cancer, melanoma and also slows the spread of breast cancer into the lungs.

24.Researchers from the University of South Dakota have found that pretreatment with curcumin makes cancer cells more vulnerable to chemo and radiotherapy.

25.Epidemiologists have hypothesized that the turmeric that is part of daily curries eaten in India may help explain the low rate of Alzheimer’s disease in that country. Among people aged 70 to 79, the rate is less than one-quarter that of the United States. (Source: Dr. Andrew Weil)

So there you go, 10 fantastic items to keep stocked in your kitchen. Be sure and pass this post along toy for loved ones so they can get on board as well!