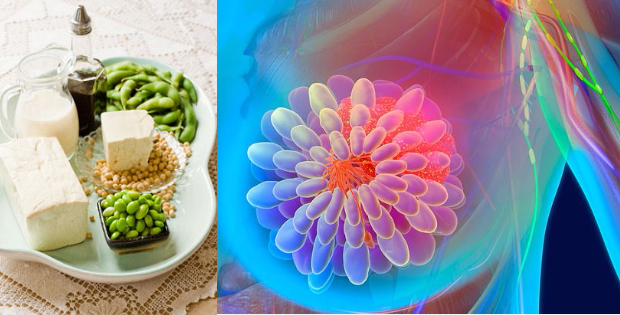 Soybeans are the most widely used, least expensive, and least caloric way for vegans to get large amounts of protein. You can eat soybeans in many forms, including tofu, the beans themselves (also called edamame), soy milk, miso, and soy powder. However, as the popularity of soya has grown, so has the number of critics questioning the benefits of this humble bean.

Because estrogen can promote the development, growth, and spread of breast cancers, doctors have worried that eating a lot of soy foods or soy isoflavones (which can be taken as a dietary supplement) might worsen the prognosis of women diagnosed with breast cancer.

At the same time, the low rates of breast and prostate cancers seen in Asian countries have encouraged scientists to investigate the role of soya foods on these and other hormone-related cancers.

WHERE DOES THE TRUTH LIE? HERE’S WHAT SCIENCE SAYS:

More recently, a study of more than 1,500 Asian-American women found that eating soya foods during childhood could reduce the risk of breast cancer by 60 per cent (Korde et al., 2009). The greatest protective effect was seen in those eating soya six times a month or more, compared to less than three, from childhood onwards.

THESE STUDIES SUGGEST THAT HIGH SOYA INTAKE DURING ADOLESCENCE REDUCES BREAST CANCER RISK AND THE RISK CONTINUES TO FALL IF PEOPLE CONTINUE TO EAT SOYA AS AN ADULT.

Drawing the evidence together, Trock et al. performed a review of 18 studies on soya exposure and breast cancer risk published between 1978 and 2004 (Trock et al., 2006). Results show a modest association between a high soya intake and a reduced breast cancer risk. However, the authors warn that this result should be interpreted with caution and that recommendations for high-dose isoflavone supplementation to prevent breast cancer or prevent its recurrence would be premature. Therefore, consuming soya as a part of a healthy diet is highly commendable, whilst more research on taking high-dose isoflavone supplements is needed.

THE PROTECTIVE EFFECT OF SOYA WAS RECENTLY SHOWN TO APPLY TO WOMEN WHO HAVE BREAST CANCER TOO.

The Shanghai Breast Cancer Survival Study looked at over 5,000 women previously diagnosed with breast cancer (Shu et al., 2009). Results showed that those who ate more soya foods (11 grams of soya protein per day, equivalent to one and a half servings of tofu or soya milk) were less likely to die from the disease and had a significantly lower risk of recurrence.

Another study of almost 10,000 women (Nechuta et al., 2012) revealed that soya consumption after the breast cancer diagnosis slightly decreased the risk of death and significantly decreased the risk of developing a new tumour. And a similar study of breast cancer patients and soya food intake concluded that soya intake equivalent to about one serving of soya based food per day is associated with longer survival and low recurrence among breast cancer patients (Zhang et al., 2012).

SOME HEALTHCARE PROFESSIONALS ARE CAUTIOUS

and think that even the small oestrogen-like effect of soya foods may be detrimental for women with oestrogen-receptor positive (hormone sensitive) breast cancer who have gone through the menopause and whose natural oestrogen levels have dropped (PCRM, 2002). Their concern is that the weak oestrogen activity of soya isoflavones may stimulate the growth of tumours which are sensitive to oestrogen. This is not a concern for premenopausal women, who have much higher levels of oestrogens which are many times more potent than phytoestrogens.

However, these concerns are based largely on the results of in vitro (test tube) and animal studies but human studies never confirmed them. In fact, more and more human studies show that soya is safe and can be even beneficial for breast cancer patients.

ON THE WHOLE, THE EVIDENCE SUGGESTS THAT CONSUMING MODERATE AMOUNTS OF SOYA FOODS IS SAFE FOR WOMEN OF ALL STAGES OF LIFE AND LIKELY TO BENEFIT HEALTH, BOTH IN TERMS OF BREAST CANCER RISK AND OTHER CHRONIC DISEASES.

Prostate cancer rates also vary widely around the world, tending to peak in developed, wealthy countries. Japan is the exception, where prostate cancer rates are surprisingly low, despite its high standard of living, and some research suggests that soya may be responsible.

There is a growing body of evidence establishing a strong association between diet and prostate cancer and soya foods in particular have been linked to lower risk of disease development (Gardner et al., 2009).

AN ANALYSIS OF A NUMBER OF STUDIES ON THE SUBJECT SHOWED THAT SOYA FOODS COULD LOWER THE RISK OF PROSTATE CANCER BY UP TO 30 PER CENT.

Interestingly, this research found that while non-fermented soya foods, such as tofu and soya milk, lowered the risk, fermented ones such as miso and soya sauce, did not (Yan and Spitznagel, 2009).

IN SUMMARY, THERE ARE NO HUMAN STUDIES THAT SHOW AN INCREASED RISK OF CANCER DUE TO SOYA CONSUMPTION BUT PLENTY OF EVIDENCE SUGGESTING THAT IT PROVIDES PROTECTION FOR BOTH MEN AND WOMEN.

OTHER TYPES OF CANCER:

Soya is a widely studied food and many scientists suggest it might be beneficial in the prevention of more types of cancer than previously thought.

A long-term, 13-year study of nearly 50,000 women of all ethnicities, revealed that regular intake of isoflavones can significantly reduce the risk of endometrial cancer (Ollberding et al., 2012). Endometrial cancer usually means cancer of the inner lining of the uterus but it can spread to, or affect, surrounding tissues.

A recent study focused on whether one of the soya isoflavones, genistein, can affect human colon cancer cells (Mizushina et al., 2013). The results showed that genistein was able to prevent the cancer cells from multiplying and the authors suggested that it may be an anticancer food component.

And another substantial study of almost 10,000 people investigating if soya intake has any effect on the risk of stomach cancer (Kwang-Pil et al., 2013) discovered that people who consumed soya foods more than three to four times a week were significantly less likely to develop stomach cancer. It’s interesting to note that the study also revealed that frequent intake of fried food increased the cancer risk, whilst high intake of green vegetables decreased it.

THERE ARE NOW THOUSANDS OF STUDIES ON SOYA AND ITS EFFECTS ON HUMAN HEALTH PUBLISHED EVERY YEAR AND THEY PAINT A VERY POSITIVE PICTURE – SOYA IS POTENTIALLY BENEFICIAL IN THE PREVENTION AND TREATMENT OF MANY DISEASES, INCLUDING MANY TYPES OF CANCER.