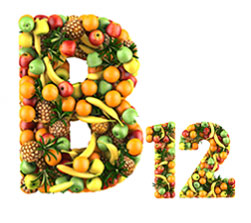 Plant-based people get their B12 from living bacteria in the soil, however its becoming more and more scarce through those means. This means that those who eat a 100% plant-base diet are at a great chance of deficiency. Now, don’t treat this like WebMD and start freaking out if you have one or two of these symptoms, but common symptoms of B12 deficiency are:

If you are concerned that you may be deficient, then you need to see your primary care physician and run a simple blood test.

Omnivores don’t need to cover their ass with B12 supplements because it is commonly found in animal products such as eggs, cheese, beef, lamb, seafood, dairy. However, the health risks of eating animal products greatly & negatively outweigh having to take a B12 supplement. It is found in some plant-based foods like almond/coconut milk fortified (3mcg/cup), nutritional yeast (2mcg/tablespoon, and tempeh (12mcg/100g). It’s also found in fortified food but the problem with those is that fortified foods aren’t a reliable source; they have poor B12 absorption rates by the body since the B12 is derived synthetically. You’re probably asking yourself how many micrograms (mcg) you need right? Well the recommended daily allowance is 10mcg of a daily supplement or 2000mcg of a weekly suppliment such as a shot. The less frequently you consume B12, the higher the total amount needs to be because there is better absorption in smaller amounts: about 50% of 1mcg all the way down to .5% of 1000mcg.

So when it comes to the supplements, specifically, there are some things to keep in mind. First, that 10mcg/day gives about a 50% absorption rate. Also, verify that it’s “vegan” and clearly makes as such on the bottle or ask your doctor to confirm the shot is. When you look at the nutrition info on the back of the bottle, it will have a long word next to or under where it lists B12; either “methylcobalamin” or “cynocobalamin”. Be sure to choose methylcobalamin (methyl) over cynocobalamin (cyno). Methyl is absorbed into the body better because it contains a grouping of hydrogen and carbon, which is natural. Cyno contains a cyanide grouping which is synthesized, thus not absorbed as well. You’ll also have to pick you method of delivery. Sublinguals, sprays, and liquids, which are utilized by the body faster (Verify no added sugar). Shots, which will have to be administered by a professional periodically. Or, you can go with pills. Personally, I like the Jarrow’s formula chewable/sublingual. It’s super easy to take daily, has great absorption, and is a methyl version. Whatever you choose, be sure to do your due diligence on the brand first to ensure you are getting a good product. Lastly, don’t take the supplement too close to bed as it can act as a stimulant. Right below is a quick link to the B12 I recommend.