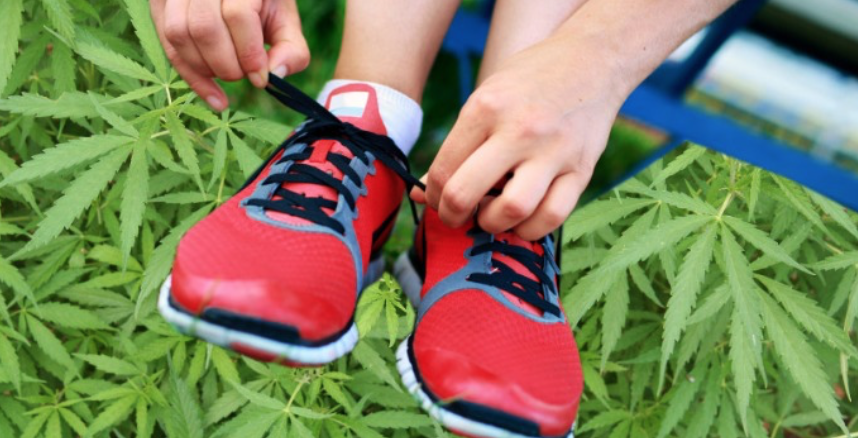 Endorphins don’t cause post-exercise rush after all The elusive “runner’s high” is everyone’s favorite fitness side effect. Sure, having a long, healthy life and flat abs are nice, but how amazing is that “I’m the king of the world” feeling that makes you feel invincible enough to quote Titanic as a grown adult? According to a new study, that high may be more legit than you think.
For years the term “runner’s high” has been synonymous with “endorphin rush,” both being used to describe that euphoric feeling you get post-sweat session, when you have literally outrun your anxieties and even feel less pain.
But German researchers recently discovered a flaw in that theory: It turns out endorphins can’t cross the blood-brain barrier and therefore cannot be responsible for your Pilates pump.
But you know what can cross the blood-brain barrier and has the bonus of making you high? Pot. Technically it’s the brain’s endocannabinoid system — the same one affected by THC. Sensing a pattern, the scientists set up a mouse study to compare the effects of post-exercise endocannabinoids and endorphins on the brain.

After a few months of putting the little rodents through five-hour treadmill runs and then testing their anxiety and pain responses, they discovered that a runner’s high is more high than running. (Which might explain the propensity runners have to wear tutus and gorilla suits in races?)

In a paper published in the Proceedings of the National Academies of Sciences of the U.S., the researchers concluded that anandamide, a type of endocannabinoid that floods the body during exercise, is actually responsible for that post-workout rush and that endorphins actually have very little to do with the whole process.

“We thus show for the first time that cannabinoid receptors are crucial for main aspects of a runner’s high,” the researchers wrote.

In the end, does the knowledge that your runner’s high comes from one brain chemical instead of another change how you exercise? Not really. But it is kind of cool to think that working out can give you the same kind of rush smoking a bong will, but without all the nasty side effects like lung cancer, impaired judgment or eating three bags of Flamin’ Hot Cheetos in one sitting.

And hey, anything that motivates people to go out in the dark on cold mornings and exercise is worth shouting from the rooftops.